The first Wrkshp rpi was first held during the Norbergfestival (25-27 july 2013) to make your own self-embedded DIY (Do it Yourself!) music instrument with Raspberry Pi in combination with Arduino.

The Raspberry Pi one-board computer was developed in UK to educate the coming generation in programming and hardware usage/prototyping. The price level of the board was then to become set in the range of only 25-35 $ making it a useful tool in many areas, especially in the MAKE movement and the DIY music communities.

We felt that the timing for a workshop in the Raspberry Pi (RPi) would make sense at this point of time, since its now easy to get and the communities are growing around it.
Due to the fact that many different areas were needed to cover the RPi we invited people from fields from music, electronics, gear-bending and to linux programming and embedded systems experts.

Thanks to this initiative we could make it possible to lay out a first example of a working method of using RPi as a music tool. In this start we used the software Pure Data for the platform to build a small synthesizer. 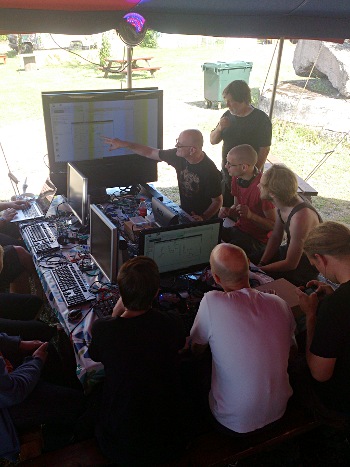